Furnished apartments for rent in Barcelona

See All Apartments in Barcelona

Just a few of the many reasons you'll love Homelike 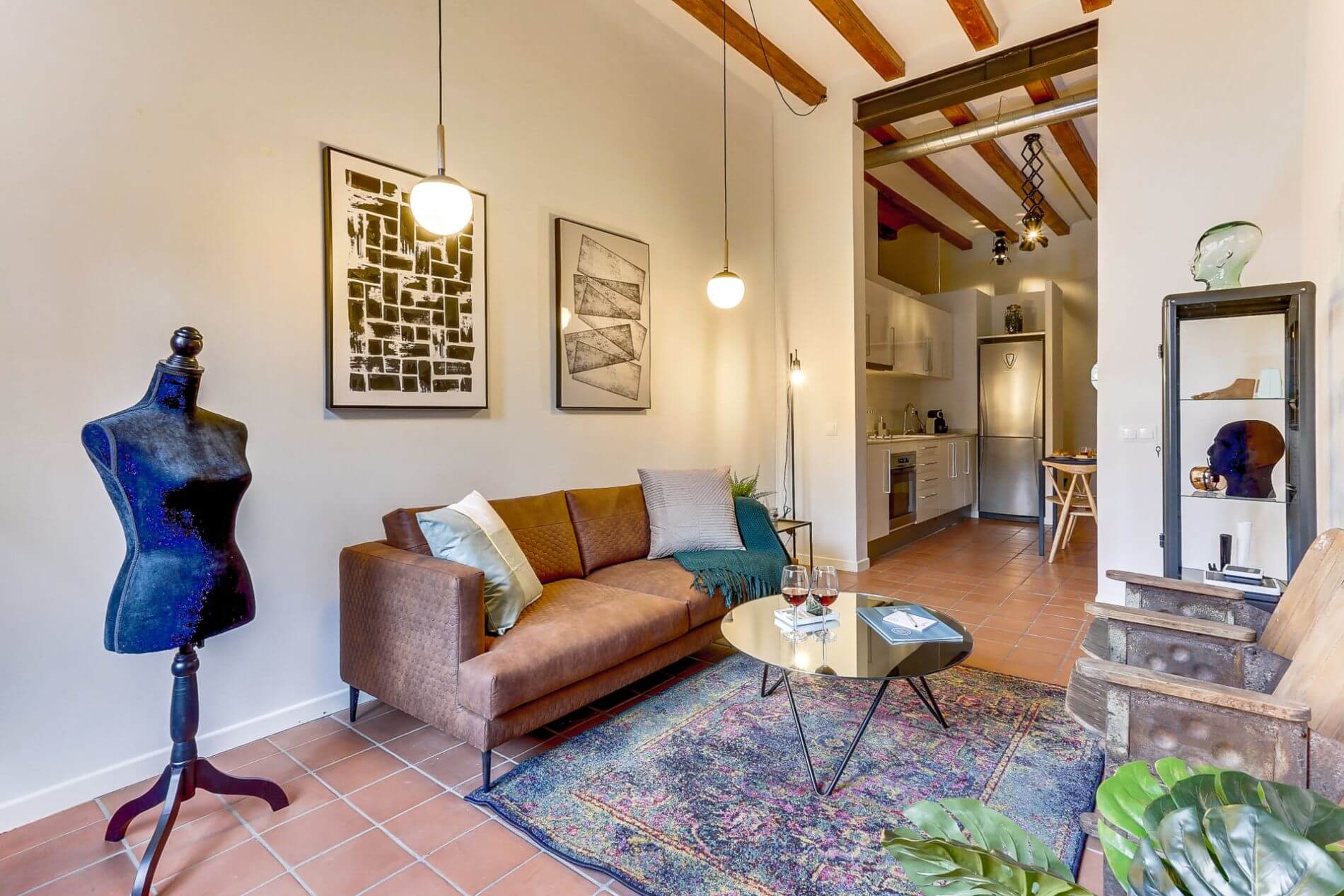 Our local interior designer has combined antique European elegance with Barcelona's artistic flair. With high, wood beam lined ceilings, tall windows, and a charming balcony, this sunny apartment is the perfect place to recharge after a long day exploring. Have a calm night in with the state-of-the-art kitchen, then drift off to sleep in the plush bedrooms. 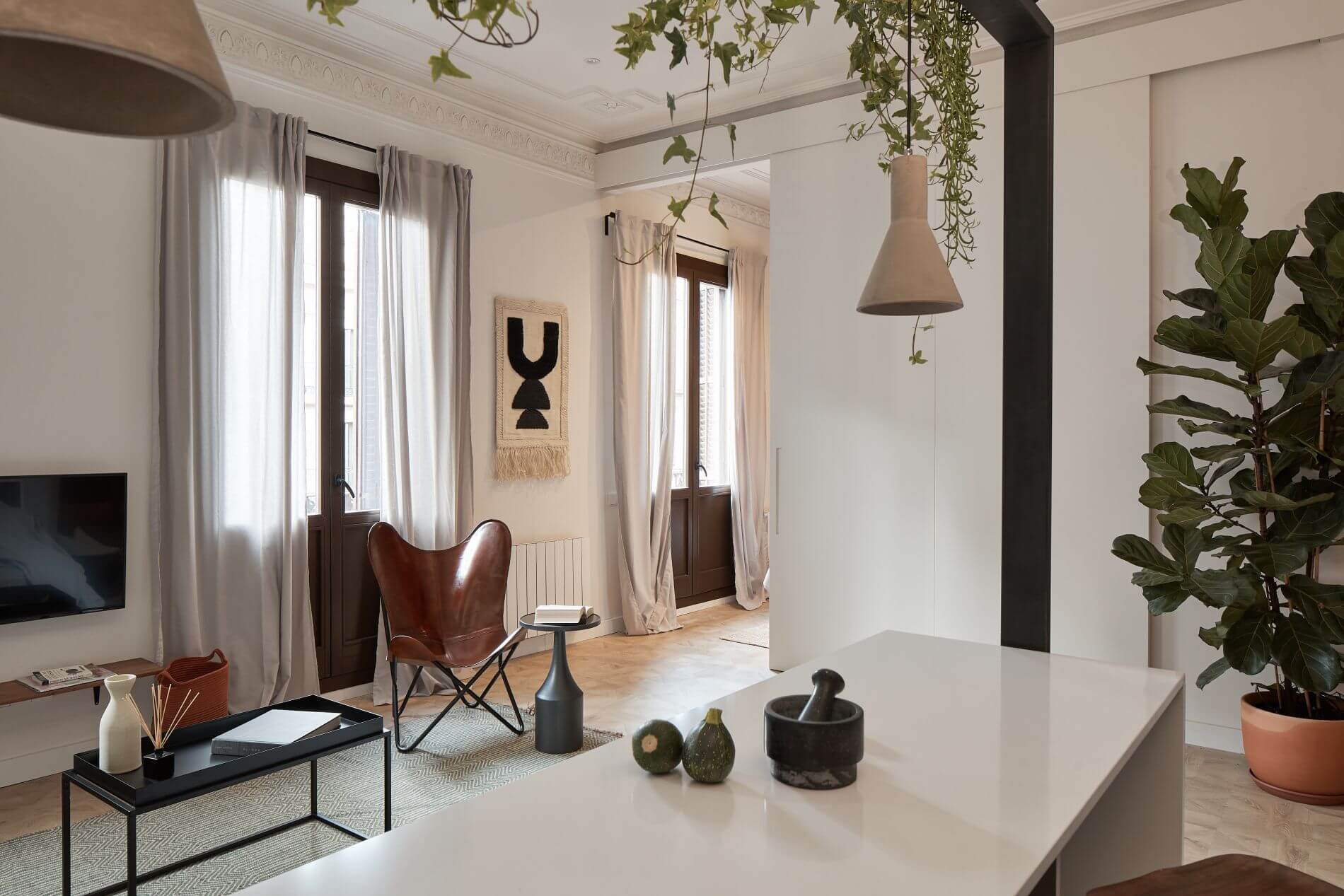 Stylish apartment in the center of Barcelona

This typical Barcelona style flat benefits from beautiful floor tiles, high ceilings, and intricate moldings. Upon entering the flat, you come across a dining alcove with a large wooden table, the perfect spot to enjoy your breakfast. Across the hallway, there is an office fully equipped for your work from home needs with extra storage space. 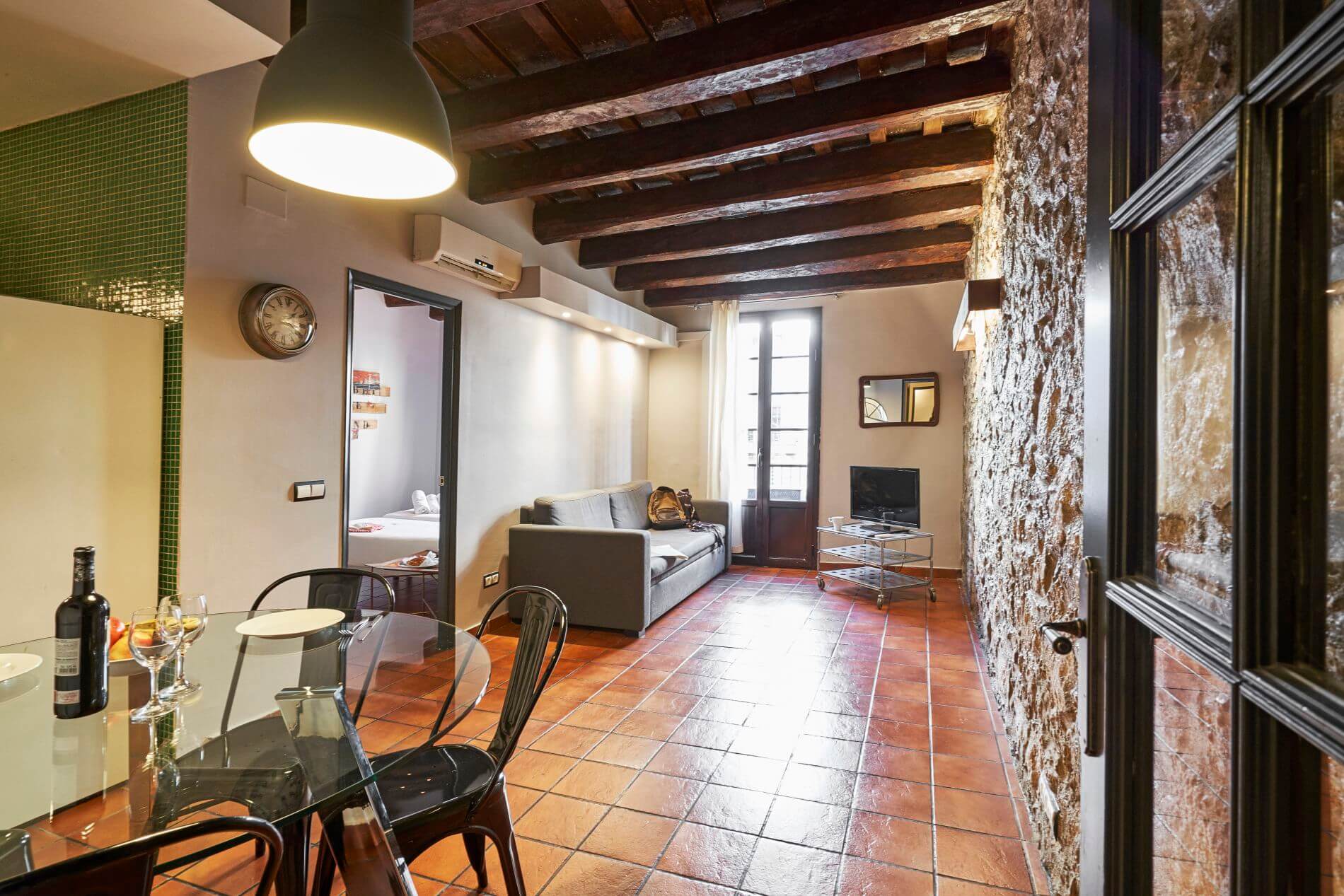 Ideal two bedroom apartment with capacity from 2-4 people. It has two bedrooms and then a double sofa bed in the living room. Super well located, steps from the Beach, Plaza Cataluña. Its in a building with elevator with fully equipped kitchen & bathroom.
See all Furnished Luxury Apartments 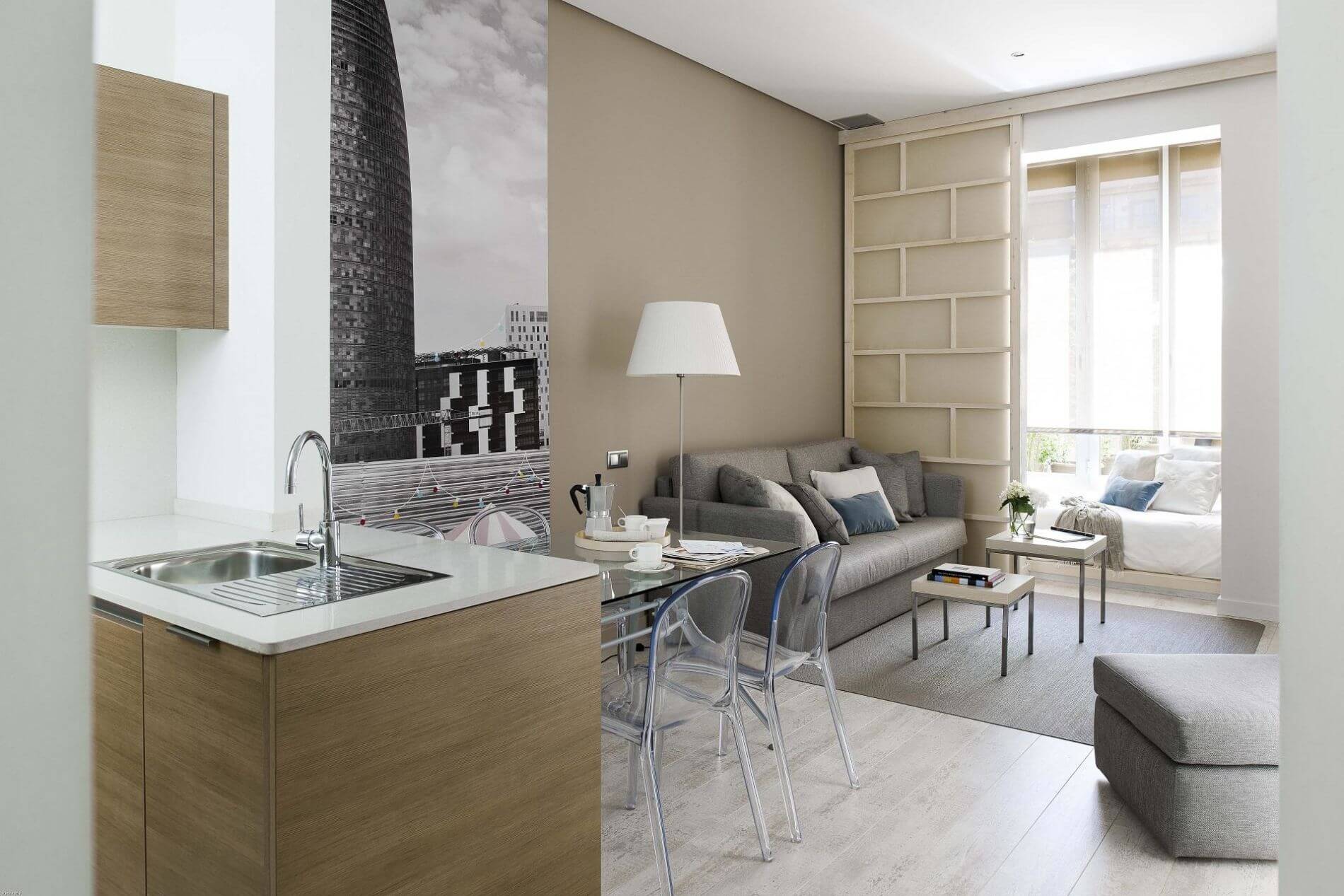 55m2 apartment, with a double bedroom and a welcoming living-room, a fully equipped kitchen and a bathroom. In short, it has everything you need to make you feel at home. The air-conditioned apartment has attractive, contemporary décor, a well-equipped kitchenette and a spacious living area with a flat-screen TV. 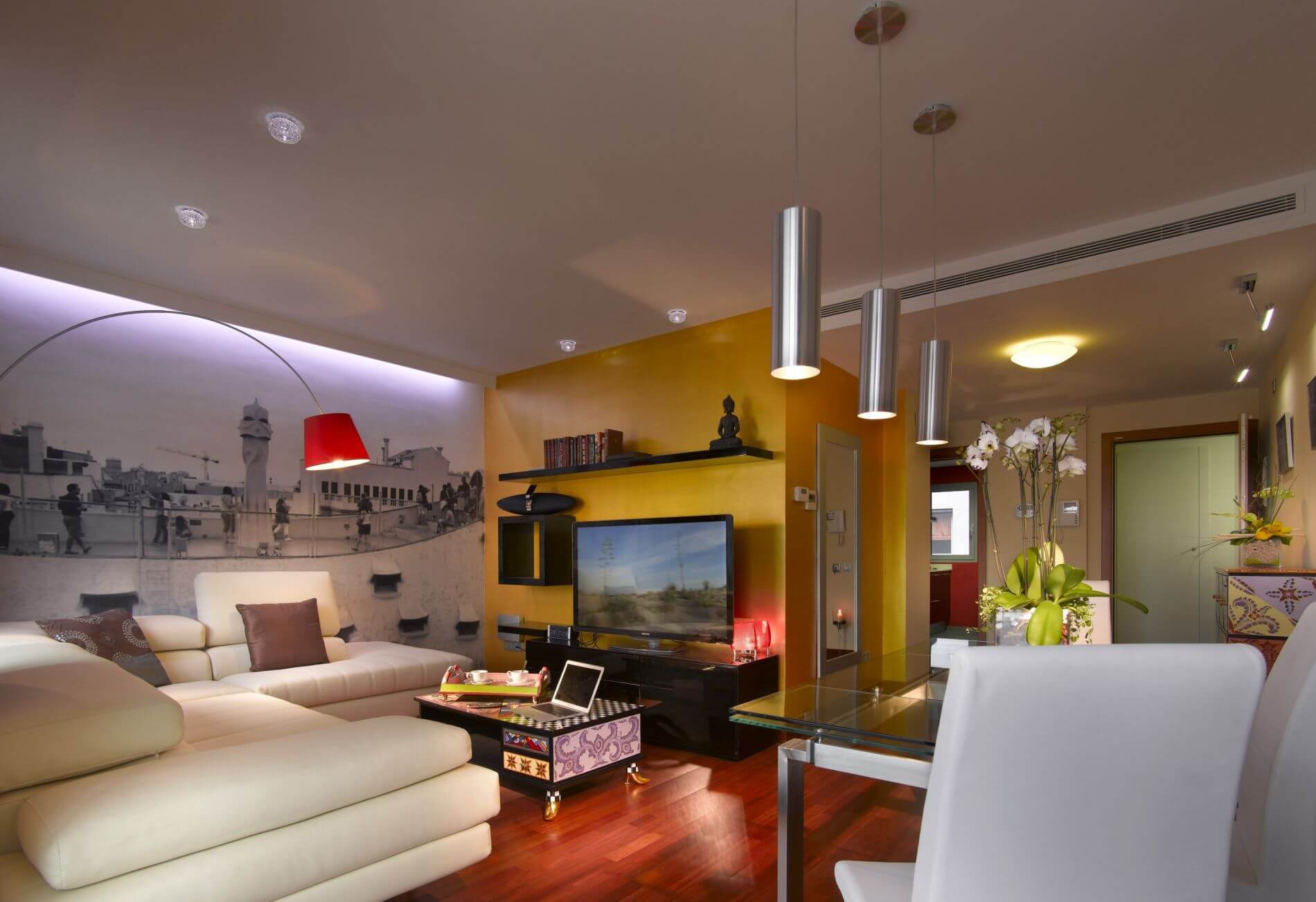 Beautiful apartment with lots of space in Barcelona

The 80 m² apartment with 3 bedrooms and 2 bathrooms is fully equipped with all the details and offers space for up to 6 people. Other services offered are parking, purchase of food packages, discounts in upscale restaurants, baby cots, baby-sitters, and much more. You will enjoy the best connectivity with free Wifi . 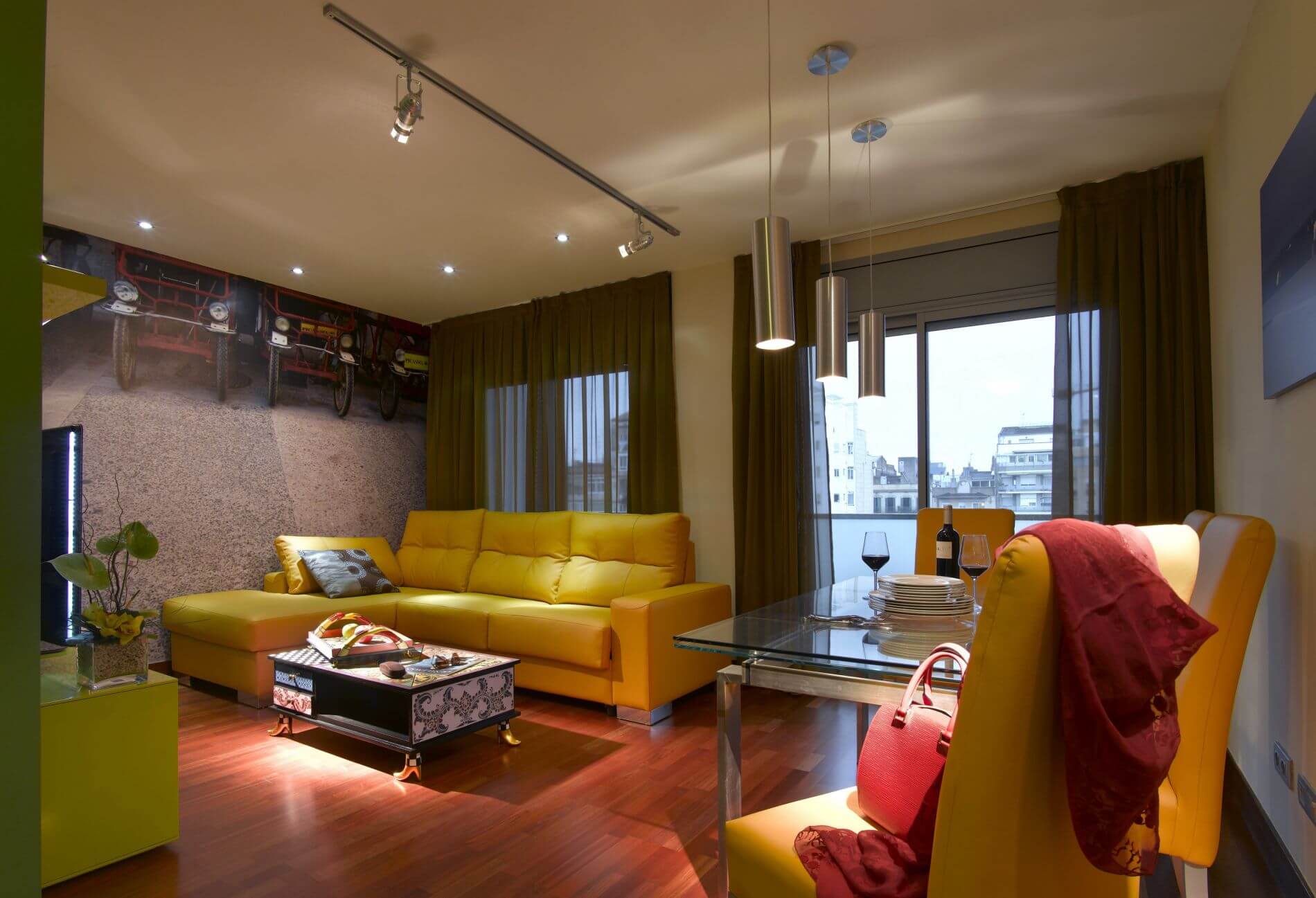 You will be able to breathe the atmosphere and see in person how the Temple that crowns the city grows. A design as avant-garde as Barcelona, a furniture synonymous with comfort without forgetting the design. A spectacular lounge, a fully equipped kitchen, comfortable beds to not leave the dream of visiting Barcelona and two bathrooms with the best qualities.
See all pet-friendly apartments 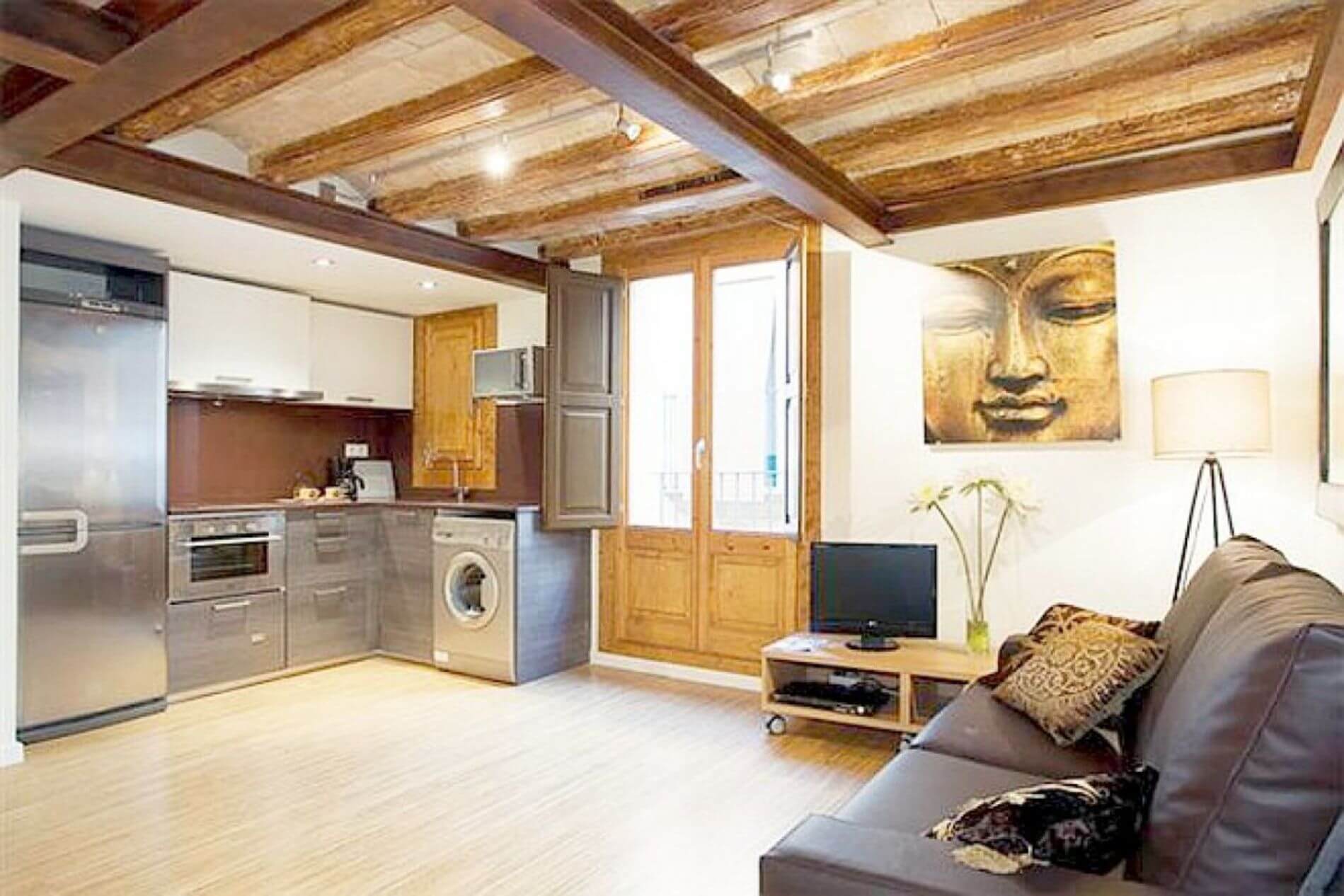 The way to play with contrasts, is what is most striking in this Bella Zen apartment. It enjoys ultramodern touches on its 21st century kitchen, an eastern thematic in the relaxing living space and finally an ambience of romance trap us in its bedroom of dreams. Sober warm colors, where the range of creamst and toasted browns prevails 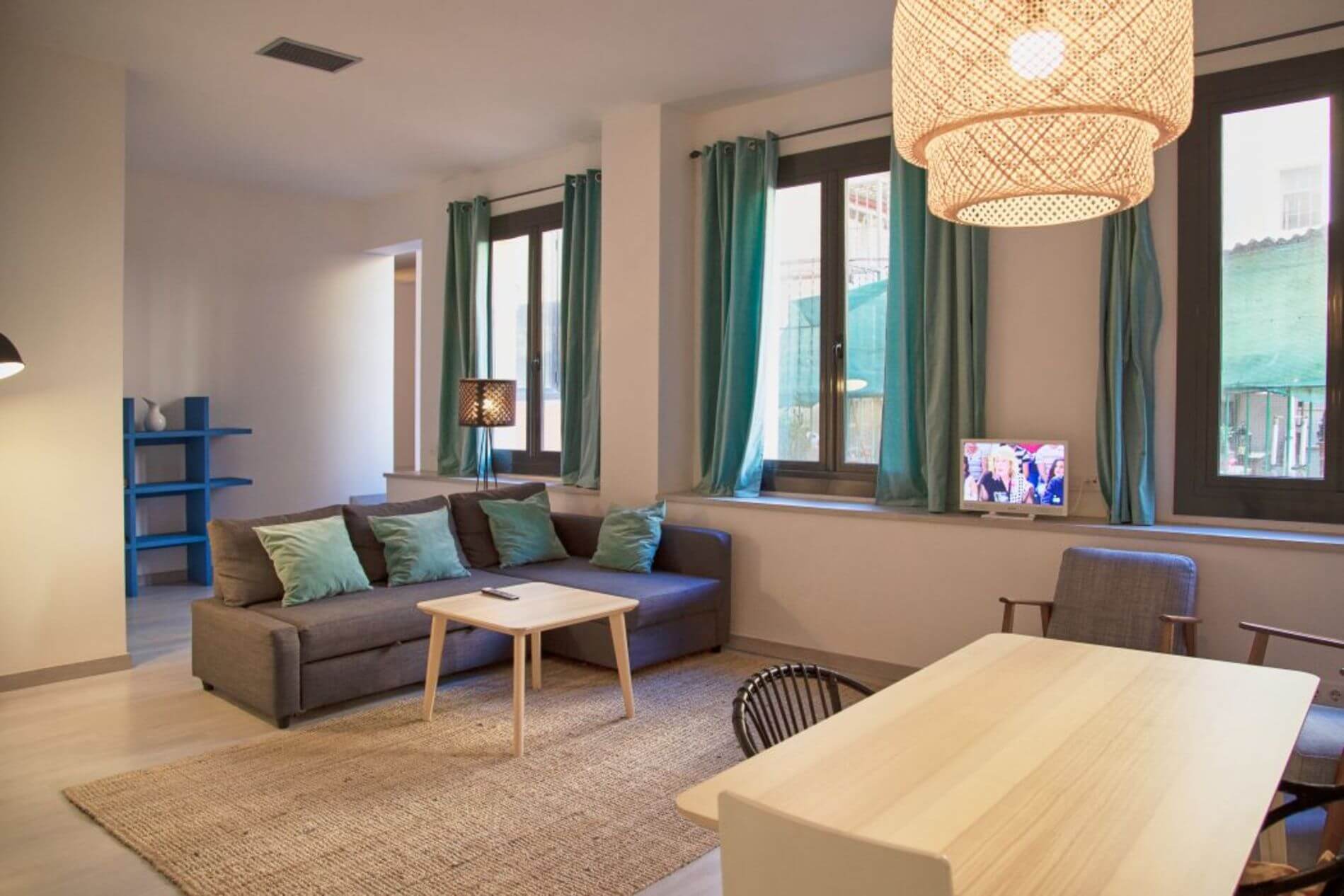 The apartment is a 60m2 one bedroom apartment with one bathroom, very comfortable and modern. It features open style dining/living area, 2 floors with small stairs, fully equipped kitchen, a bedroom with a comfortable double bed and a full bathroom. This apartment is modern, located in a great central neighborhood, with easy transport connections. 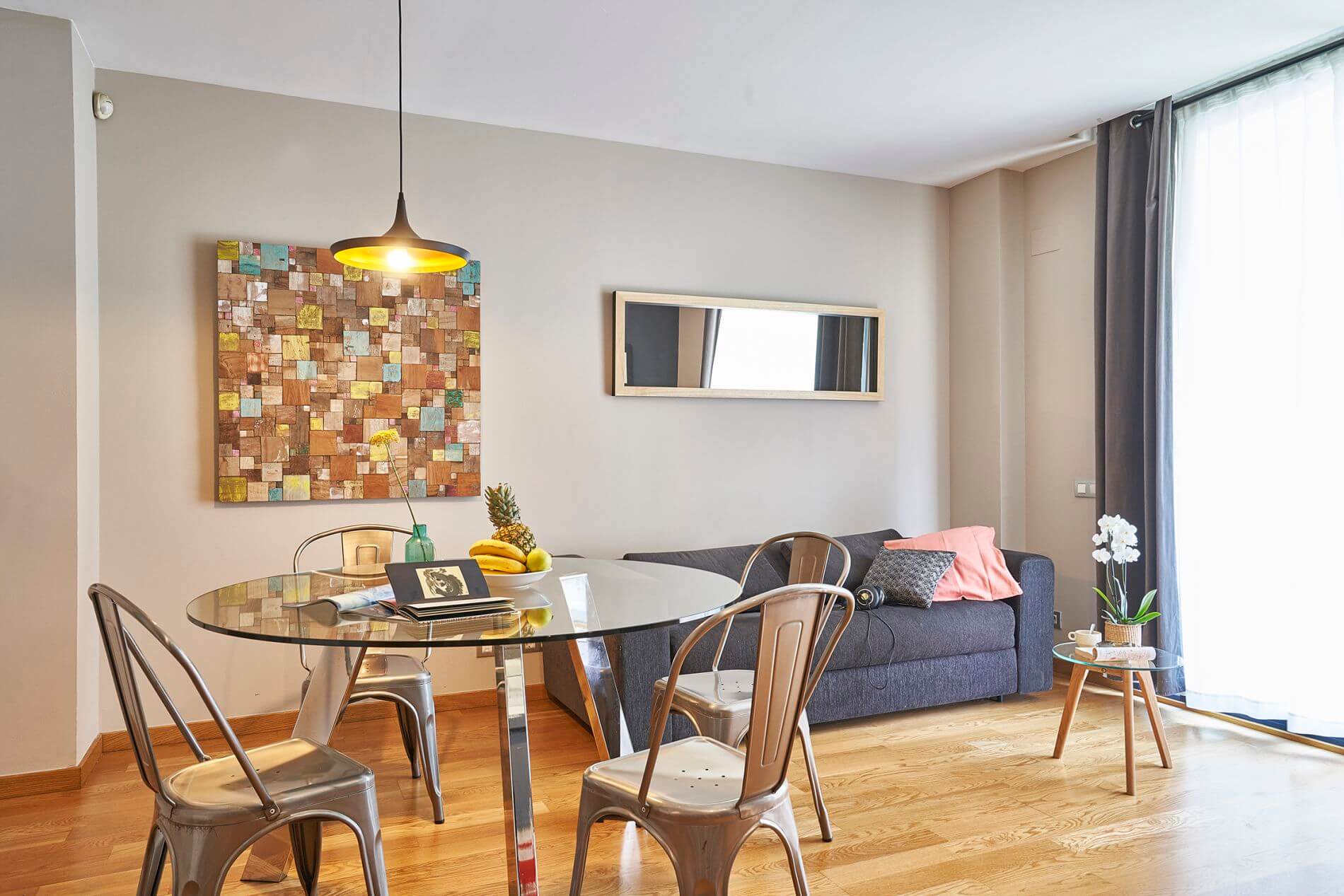 2 Bedroom apartment steps from Plaza Cataluña, in the border of Eixample area. top location. capacity from 2, to 4 to 6 people. 2 double bedrooms with single beds that can be putted together, + double sofa-bed in the living room. ONe of the bedroom have bathroom inside and the other bathroom is in the corridor.
See all instant bookable apartments

Furnished Apartments in Barcelona with balcony 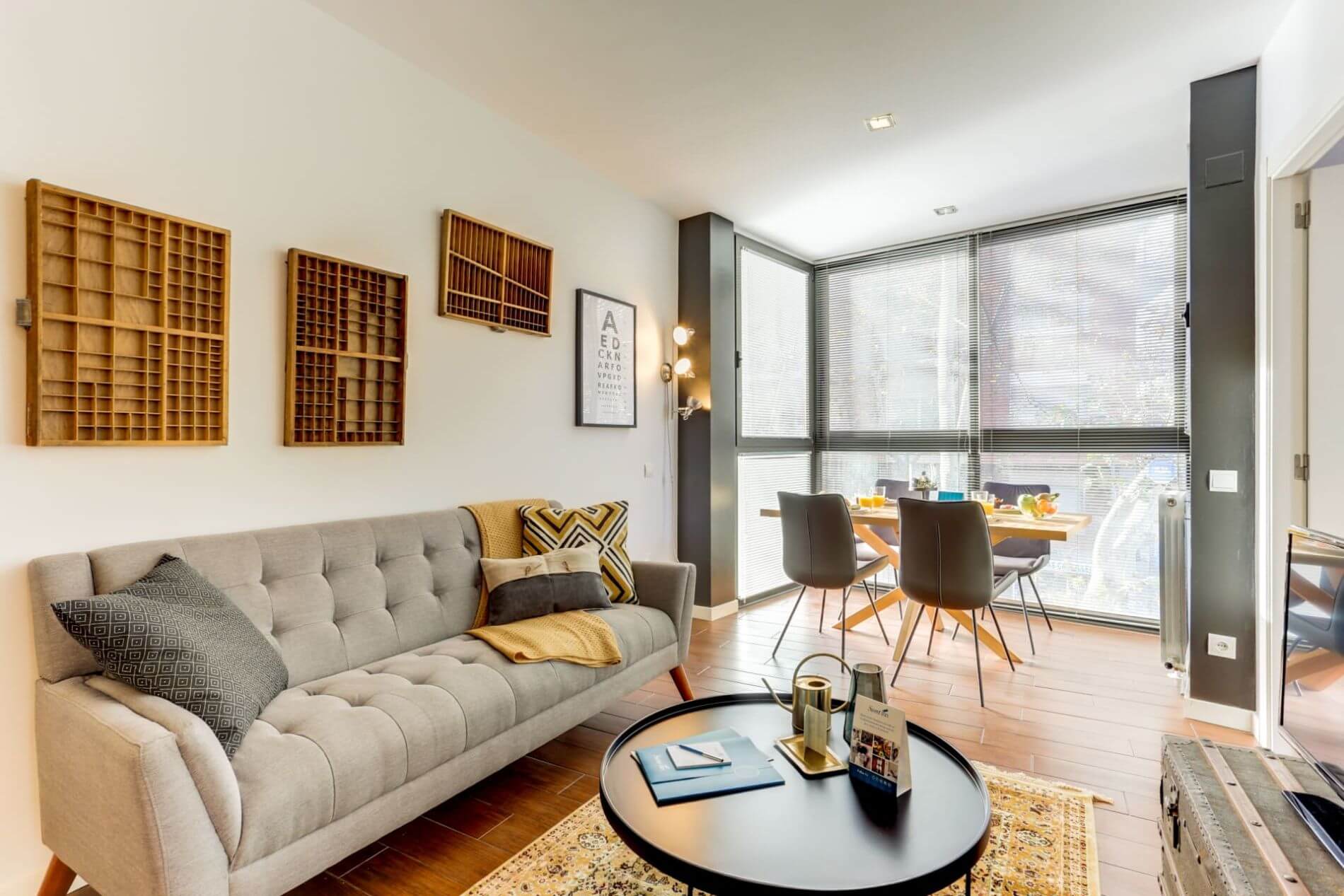 A sweet patio invites you to relax outdoors, and the state-of-the-art kitchen has everything you need to prepare a Spanish feast. Two luxurious bedrooms will help you drift off to sleep at the end of a long day exploring. Premium amenities include free WiFi, cable TV, high-end toiletries, hotel beds and linens, and a Nespresso machine. 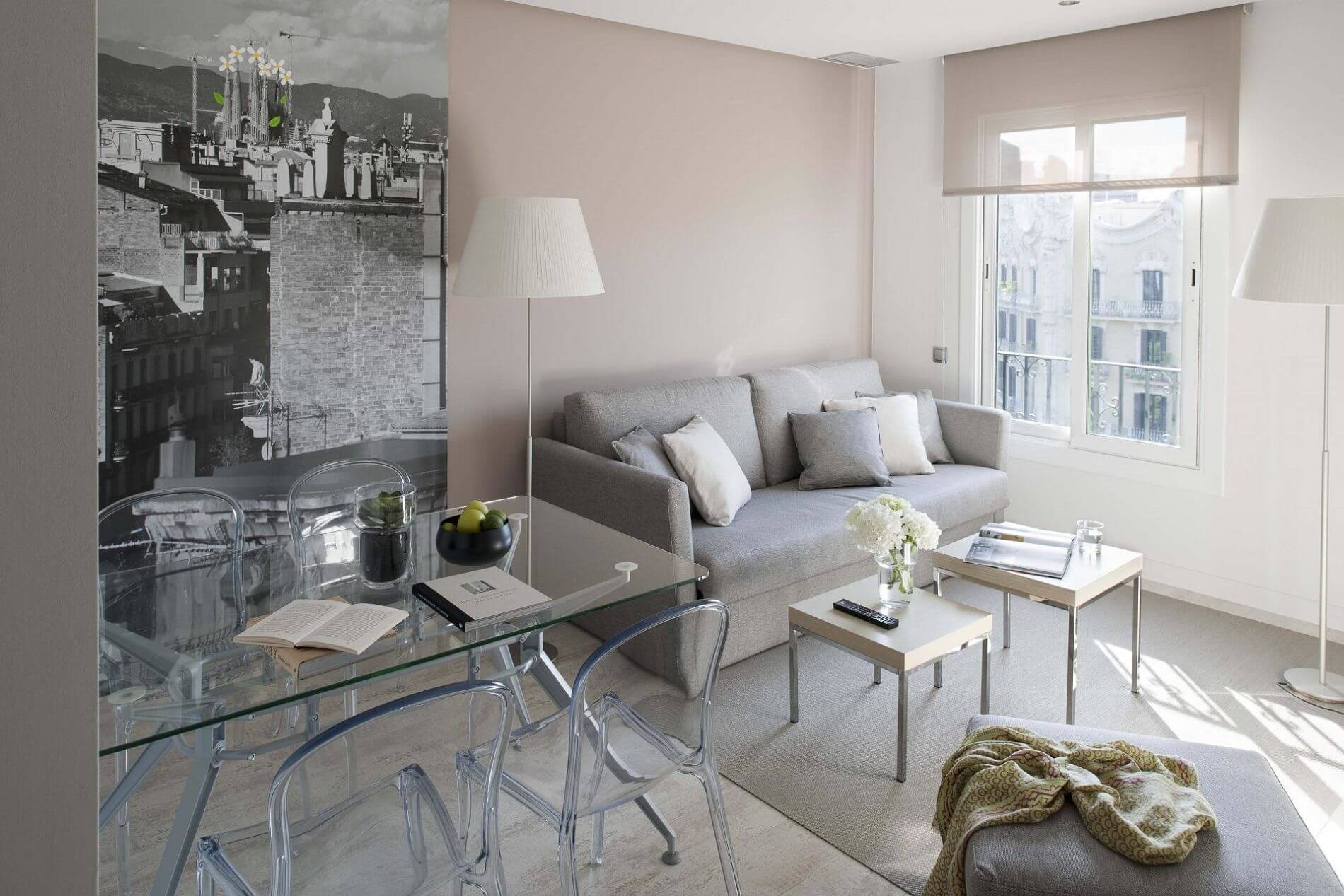 Large and bright apartment in Barcelona

This large and bright apartment, with 65m2, has two double bedrooms or one double bedroom and one bedroom with two single beds, a living room with a fully equipped kitchen, a bathroom, and a balcony. The air-conditioned apartment has attractive, contemporary décor, a well-equipped kitchenette and a spacious living area with a flat-screen TV. 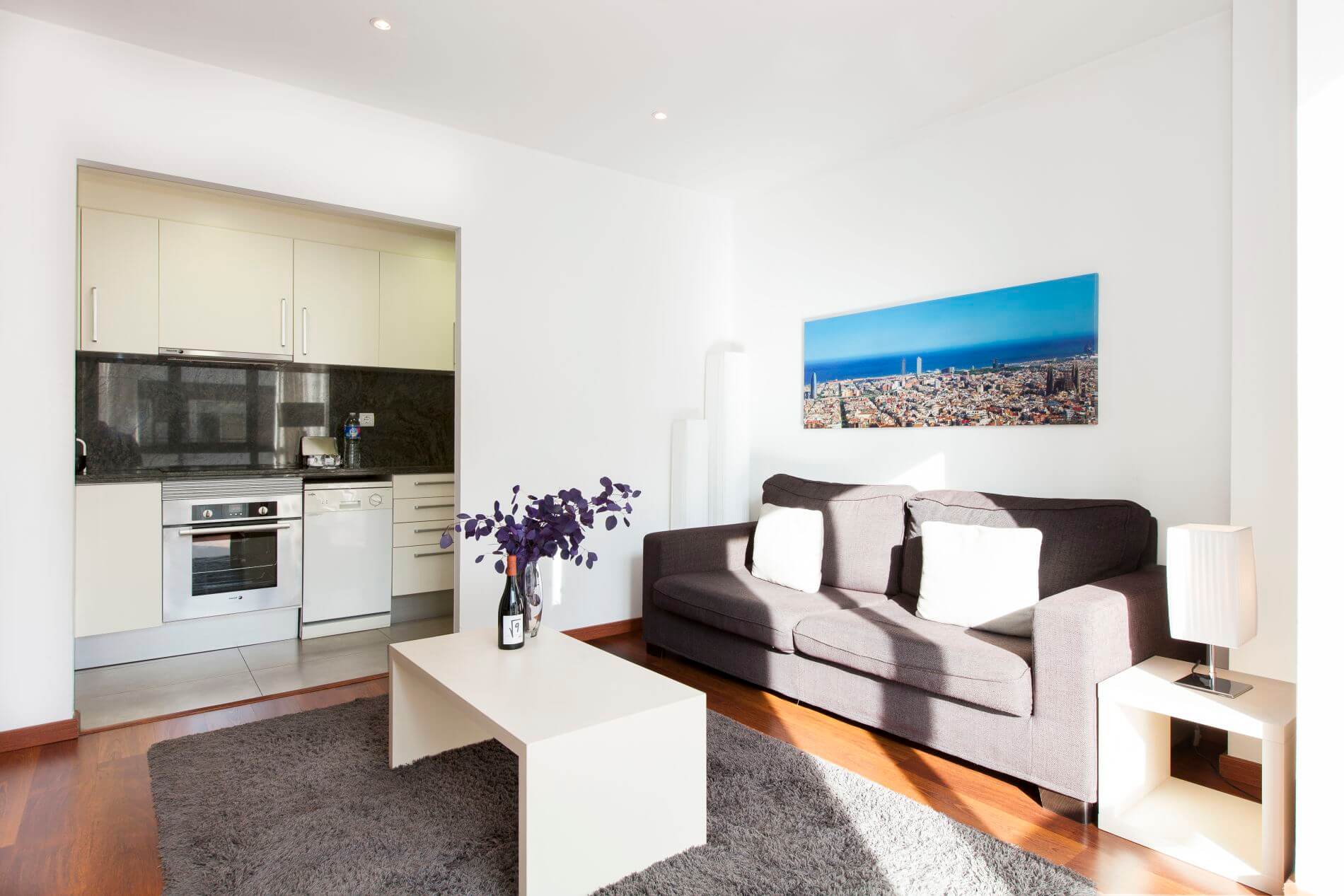 Modern and functional apartments of 80sqm distributed in two double rooms with a double bed and a double trundle bed. The bathroom is equipped with a shower with free welcome toiletries and a hairdryer. Overlooking the quiet and spacious interior patio with a small balcony.
See all apartments with balcony 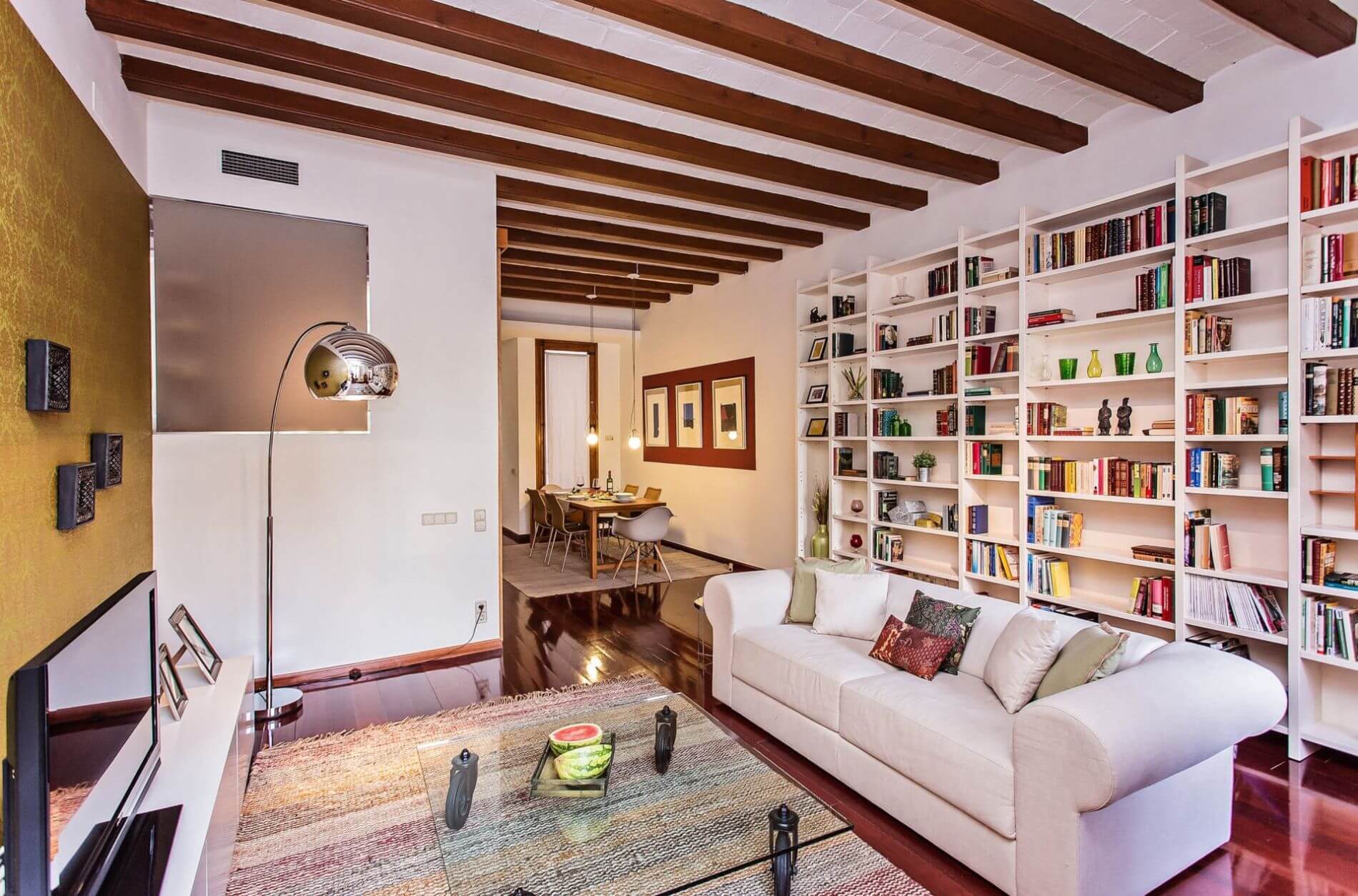 This rustic urban getaway has been decorated by our local interior designer for a cozy Spanish atmosphere. Sunlight streams through the windows, illuminating the high, wood beam lined ceilings. Two plush bedrooms and a state-of-the-art kitchen will make you feel at home. You do not want to miss the beautiful view from the two balconies attached to the living room and bedroom. 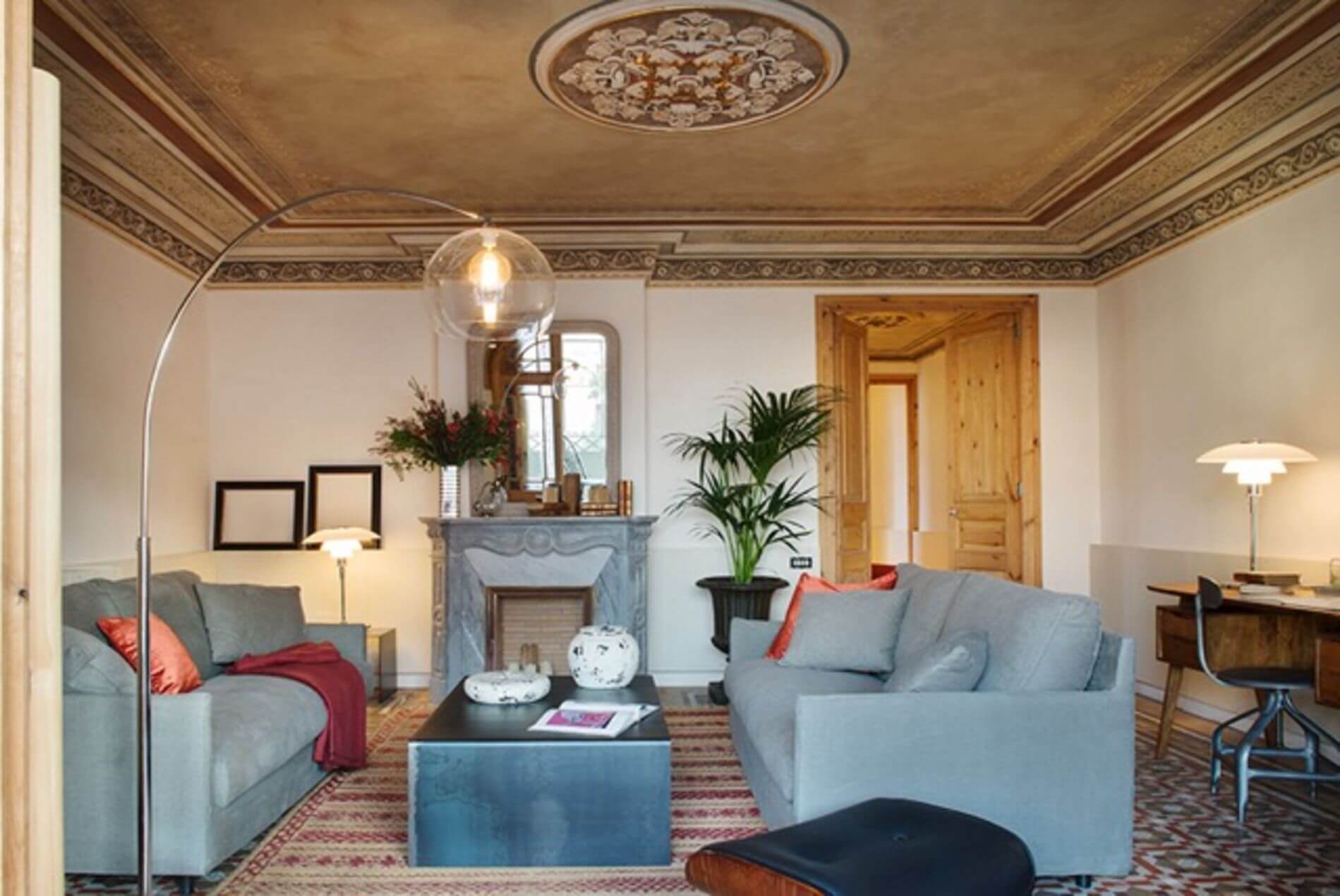 The apartment is rented fully furnished and the kitchen is equipped with all kinds of appliances. The water and electricity consumption and the Internet connection are included in the rental price. The building where the house is located has been completely restored, retaining all the original elements of the late nineteenth century. 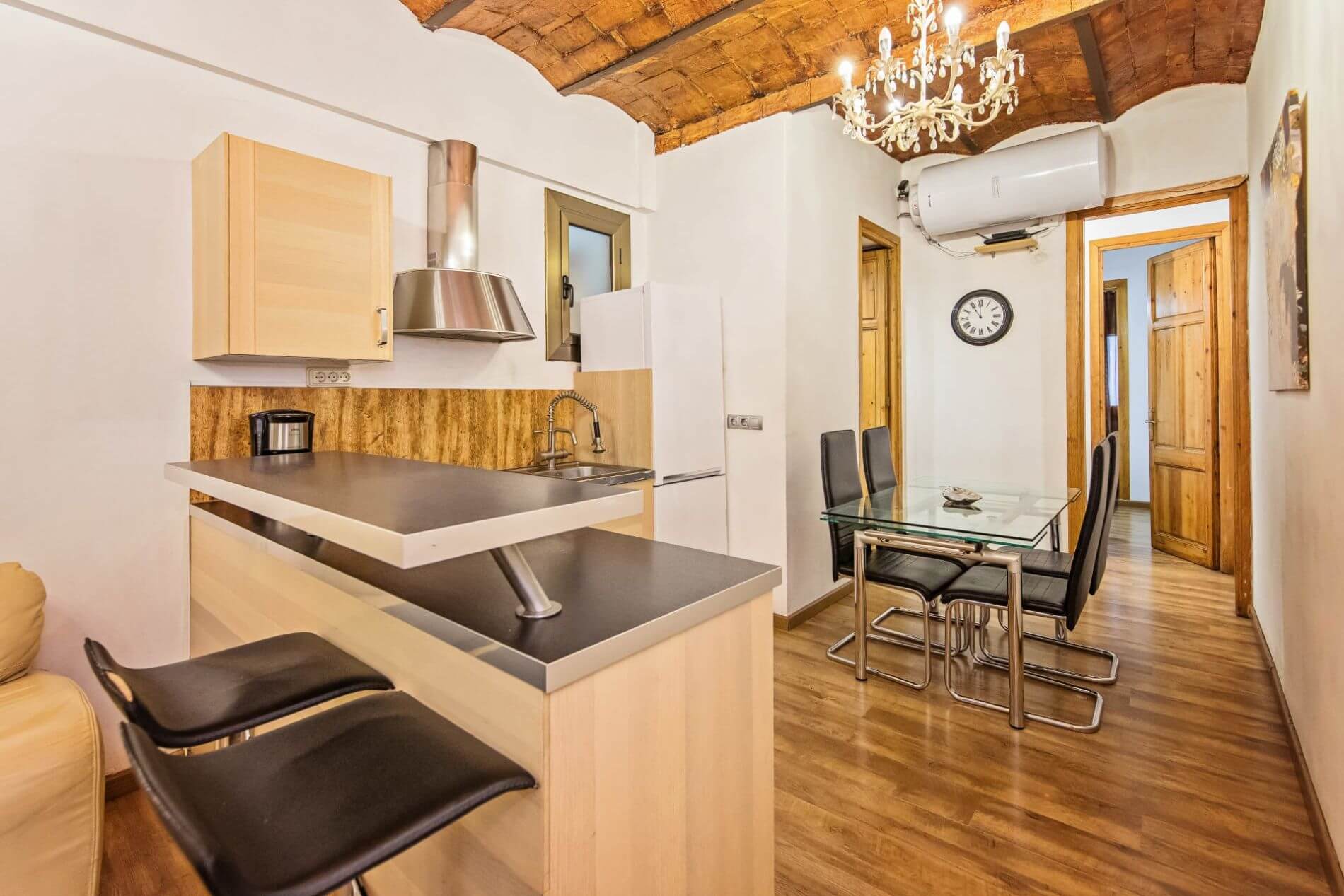 Are you planning to move to Barcelona? Then, you’re one of the thousands of people enticed by the charms of this beautiful Catalan city. With a population of over 5.5 million, Barcelona is the second largest city in Spain.

Thanks to its booming tech sector, talent from all over the world flocks to Barcelona every year. In addition, the city is steeped in history and culture and has an amazing food scene. Many people move to Barcelona just for the chance to experience life in this stunning city.

As for cost of living, Barcelona is the second most expensive city in Spain but is comparitively cheaper than many other major European cities.

The rental market can be tough as there is always high demand.  Due to the the large influx of people and proximity to beaches, the demand for housing is growing exponentially every year.

Not to worry though. Homelike offers fully furnished homes for rent in Barcelona with everything you need. Rent includes utilities and WiFi.

If you’re unfamiliar with the city, we’ve created a great neighborhood guide detailing all the best neighborhoods in Barcelona for every kind of budget, taste and family situation. You should also check out our guide on living in Barcelona to know about things you need to do when you move.

Compared to other metropolitan cities around the world, Barcelona may be significantly smaller, but that doesn’t mean to say that the city doesn’t have variation. In fact, Barcelona attracts all sorts of people hoping to take advantage of its mild year-round climate, explore Gaudi’s striking architecture, and sample some foodie delights.

Where to live in Barcelona: Barcelonaa's Best Neighborhoods
Read more